There were taxi drivers. They picked us up, turned on their meter, charged us money, dropped us off and drove away. They were everywhere.

There were obnoxious pushy hustlers that swarmed around us like dung flies, screeched like fishmongers and smelled like skunks. They crowded around large cities’ transport hubs. I wanted to spray DEET on them.

Then, there were a few taxi drivers that we will remember warmly every time we think about this trip. We met all of them in small provincial towns.

A Huangshan taxi driver knew history and loved talking. I wrote three pages of notes based on his stories. By the second day with him, we disregarded the advice from our three guidebooks and we asked the driver to pick our itinerary. He brought us to Huizhou villages much more interesting than what we would’ve found ourselves. When we ran out of money, he loaned us six hundred remnibi for entrance tickets. We paid him back of course, once we got back to an ATM. But we still feel that we owe him both for his kindness and for his knowledge.

A taxi driver at Jishou train station drove us for an hour to Fenghuang. He helped us to find our hotel, hidden by construction and located inside a pedestrian zone not passable for cars. We didn’t like the place; he suggested a better one, drove us there for free and bargained them for a better price. In a day, he arrived an hour early because, “he didn’t like to be late.” He took care of us like mother hen protects her chicks. In return, he asked us for small foreign banknotes and coins for his collection. Now, in the town of Jishou there is a Chinese taxi driver who has Russian, Kazakh, Kirgiz, American, Thai, Cambodian and Taiwanese money.

A Longyan taxi driver drove us around Tulou fortress houses for a day. There was a bit of haggling involved, true enough. But once we agreed on the price, the driver delivered. He sneaked us by an entrance point and he cheated the Chinese government out of our one hundred fifty remnibi. Later, he drove us to his town and gave us a tour of an abandoned Tulou fortress where he grew up. In the end, he brought us to his home for tea and more stories. We learned more about the life in Tulou houses from our taxi driver that we would’ve ever learned from a guide. 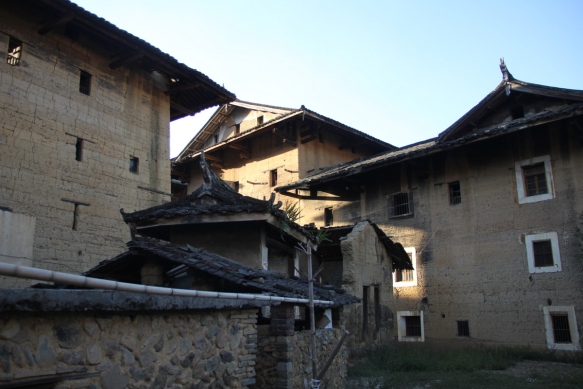 These taxi drivers were excited about strangers from a strange land. They liked us and they took care of us. They went above and beyond their duty. And I can’t even recommend them to my readers because they only speak Chinese.