Tonight, Barclays Center sports arena is packed almost to limit of its seating capacity. 19,000 people came to hear Leonard Cohen. It is strange to see all these people quietly waiting for a performance to start. Barclays feels more like Lincoln Center than a sports arena. 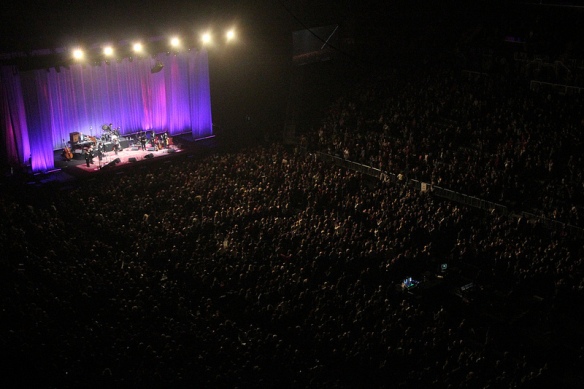 The overhead lights dim and only cell phone screens glimmer in the darkness below me. The scene lights up in bordello red and blue and the band arrives. Seventy-eight-year old Leonard Cohen sprightly scampers across the scene, like a winner of the octogenarian Olympic Games. He starts the performance with ‘Dance me to the End of Love’. As his voice fills the stage, I am left to ponder on why I like him so much.

I like him even though his songs are often too sentimental for my taste, occasionally crossing into the dangerous realm of sappiness.

I like him even though he carries with him a trio of middle-age women in black and white suits that look like tall skinny penguins. Now, they are marching and making strange waving motions on the left side of the stage.

I like Leonard Cohen and so do the 19,000 or more people sitting next to me. Old and young, men and women, Americans and foreigners, New Yorkers and tourists are listening intently, dancing with Cohen to the end of love.

Does the audience know this song was inspired by a story about a concentration camp string quartet playing for people walking into gas chamber? The lyrics get a different, darker tinge, don’t they?

Dance me to the children who are asking to be born,

The light upgrades towards the plush end of the bordello spectrum. The penguin chorus of waving women keeps striding in one place.

Cohen sings, ‘Ain’t no Cure for Love.’ Sad words reverberate between the walls. I am holding Yvonne’s small plump hand just to reassure myself that love doesn’t have to be a tragic one-sided affair. Yvonne pulls her fingers out; she needs both hands to keep shooting her camera.

Every one of Cohen’s song is a lovingly crafted ode to death, betrayal, failure, misery and loneliness, mostly self-inflicted. His poems re-enforce each other, methodically and melodically describing all the bitter options that life offers to the reader.

So, why are 19,000 people listening to a depressed bard?  Why am I sitting so still, my usual fidgeting and impatience gone? Is it, because Cohen’s gift of golden voice somehow projects reassurance and comfort? There is an eerie strength in him, confidence and quiet goodness.

The mysterious warmth in the old singer’s voice reaches across Barclays Center. It fills thousands of cubic yards of space. It fills the audience. Cohen doesn’t bring people happiness. Instead, he uses his anguish and talent to bring us wisdom and strength, necessary to cope with life.

And I hear that I should hold on to what I have; that I should appreciate every moment of joy in my life. Next to me sits a woman I love. She returns my feelings. I shouldn’t fail her and myself.

He starts ‘Tower of Song.’

All my friends are gone, my hair is gray,
I ache in the places I used to play.

A merciless projection screen to the side of the stage shows a close up of his face. 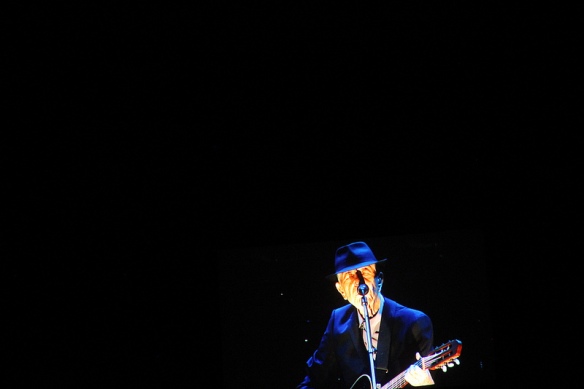 He looks like his own corpse. Strands of stringy muscles stand out on his neck. Dry skin with pigmentation spots cling tightly to his tired face. He can barely stand, and yet he continues to sing. Lesser men hold on to power or to money. With gnarly fingers, Leonard Cohen holds on to song, like a geriatric Orpheus.

A coarse man’s voice bellows from the other side of the arena, “God bless you, Leonard!”

It’s such a strangely polite thing to yell.

Cohen is pushing on.

They sentenced me to twenty years of boredom
For trying to change the system from within
I’m coming now, I’m coming to reward them
First we take Manhattan, then we take Berlin

The rhythmic music and the stubborn energy reverberating in the singer’s voice trap me. I don’t even notice when a woman one row in front of us throws up. People leave. A few minutes later, three maintenance men in grey and black suits noiselessly materialize in the air like wraiths. They cover the puddle of vomit with a cleaning powder that smells like lemoncello, noiselessly scoop the whole disgusting thing up and disappear the same mysterious way they came in.

Instead of annoying me, this small accident adds an extra tang to sadness I feel. Is this how my life will finish? Will somebody pour lemoncello flavored cleaning power over my stinking corpse and scoop me away?

In the Tower of Song, Cohen described himself as being born with a gift of golden voice. He was not bragging, he was being realistic. Funnily, it took him almost forty years to realize it. He had published three books of poetry before he sang his first song. Now, just for a few minutes he puts the guitar down, the band goes away, and the poet starts reciting the lines.

The ponies run, the girls are young,
The odds are there to beat.
You win a while, and then it’s done –
Your little winning streak.

He is his usual optimistic self.

If anything, Cohen’s voice projects more feelings when he simply speaks rather than sings. Yvonne and I travel ‘Thousand Kisses Deep’. I have a silly idea. What if Cohen just dropped the music and recited poetry for the whole evening? One concert takes in roughly two million dollars, it would be the most commercially successful poetry recitation in the history of the world

It’s been a two and half hours. I am getting tired from sitting in a chair. Cohen keeps singing. His body is shaking slightly, his movements look jerky and stiff. His voice is still filling the arena though, holding the audience hostage. It is an example of artistic depression winning over physical frailty by sheer willpower.

I keep getting nervous that he’ll just keel over and die right in front of us.

As I found out later, he did faint three years ago during a concert in Valencia.  I also learned that, on the last tour he gave twenty one concerts in fifty days.

Meanwhile, Cohen turns nostalgic. A duet of violin and piano, piercing and pacifying, accompanies Suzanne, the song that launched Cohen’s songwriter carrier in long gone 1960’s. My parents hadn’t even met yet.

Oh, well, depression has just surfaced back in its blazing glory as Cohen is singing a song about having wasted his life.

I waited half my life away.
There were lots of invitations
and I know you sent me some,
but I was waiting
for the miracle, for the miracle to come.

Well, the miracle came – he is still singing.

Yvonne is taking one picture after another. Her lens is staring threateningly towards the stage like a huge black eye protruding out of her head.

The concert is drawing to end. I am almost relieved, I would rather Cohen lived and wrote for a few more years, rather than pushed the daisies right here, on the stage. The lights turn on, and the audience goes into a collective paroxysm of appreciation. 19,000 people stand up, applaud, whistle, scream bravo. It doesn’t look yet like a sport stadium but it ain’t no Lincoln Center either. 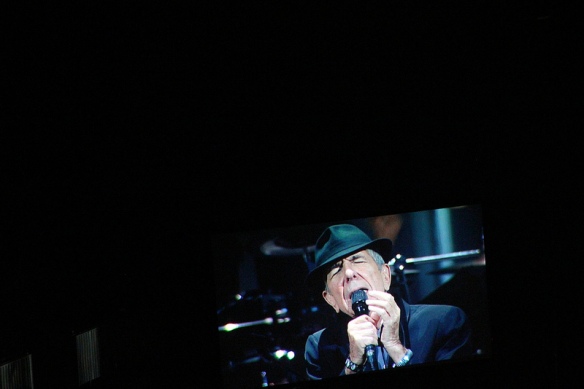 Not surprisingly, it didn’t work out so great for the guy in the end,

Yvonne looks at me, pointedly, “Don’t you screw up.” I look back at her, “I promise.”

Will he ever stop? It’s being four hours. Is he only alive when he sings? What if he is actually dead between the concerts and his team revives him from suspended animation when the time to sing arrives?

Finally, Cohen is gone. He will speak no more and his voice be still. Till the next concert, hopefully.

The light is back on and multitudes of people are hurrying out in perfectly organized flows. From the top, they look like ants marching out of an anthill. In only a matter of a few minutes, the arena becomes lifeless and empty. Yvonne packs her camera and we leave.