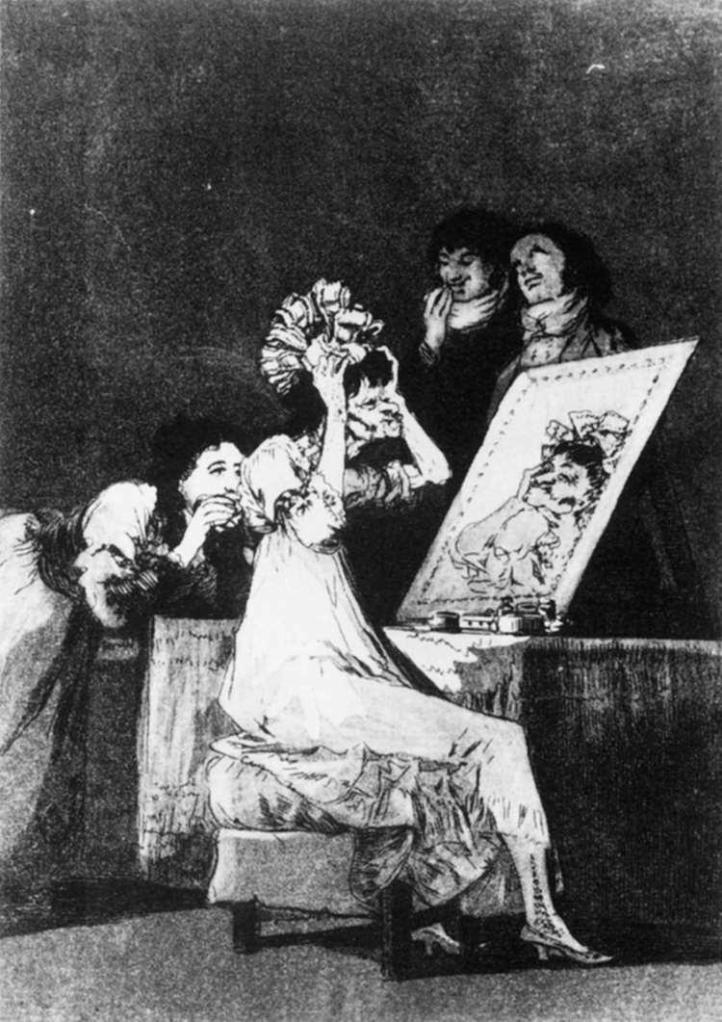 In 1799, the Spanish painter Francisco Goya published a series of 80 etchings called the Caprichos. He used the etchings to systematically illustrate the vices, foibles, and evils of his world. In no way, are the Caprichos easy or pleasant to watch; each etching radiates anger, fear, sorrow, hopelessness and suffering. The etchings are not particularly subtle; Goya drove his point home with a hammer made out of crude satire.

Etching #55, Until Death, shows a Platonic ideal of an ugly old woman beautifying herself in front of a mirror. When I first saw it, I just thought, “Oh, whatever, it’s such a no-brainer to mock a vain dumb old hag.” To me, the etching was one of the least interesting in the series and it faded from my memory quickly.

It took me twenty years to understand that this etching was just as much born of Goya’s genius as any other.

Yesterday morning, I was walking down 6th Ave in Manhattan. As it intersected 30th street, a light breeze playfully blew the rancid smell of a homeless person up my nostrils. As I started breathing with my mouth, I looked around and I saw an old woman standing next to a cart full of recycling and refuse.

She was dressed in the black pants, a dilapidated leather jacket, a purple hat and a polka dotted headscarf. Carefully manicured fingernails with a bright polish presented a study in contrast with the woman’s wizened hands. She was holding a compact, looking into the mirror, apparently applying blush to her face.

As I was looking at the old homeless stooped stinking woman making herself pretty next to her wheeled dumpster, the memory of Goya’s etching forced itself on me.

Was the etching indeed a crude satire? Or was it a dispassionate description? Or did a deaf and mentally unhinged fifty year old painter show sympathy and deep understanding of women?

Many stories have been told about men preserving their dignity in dire circumstances against all the odds. Part of it is preserving their appearance. A prisoner bleeds as he shaves himself with a sharpened spoon in a solitary confinement; a POW, overworked and starved, washes and cleans his clothing in a concentration camp; an Arctic traveler keeps his manners and dresses carefully for a dinner night after night through a Polar winter.

I read all these stories as a kid and I admired these men for the strength of their will, the power of their personality, their manliness.

Then, I looked at an old hag putting makeup on her face and my immediate reaction was derision. Why?

She spent hours rummaging through the garbage bins to find clothing that matched and fit her well. She used her few dollars on the makeup rather than food. Was it vanity or was it her way of keeping her human dignity? It seemed to me that she polished her nails and powdered her face to prevent herself from giving up on her life. Being beautiful in her own eyes was a key part of her identity and human dignity.

I thought about Goya’s etching and its title. The woman in front of the mirror looked almost dead but she was still putting her makeup on. She struggled to stay erect and her hands shook as she was brushing her hair and painting her lips. How much easier would it be for her just to curl on a couch and resign herself? Against the overwhelming odds, she chose to fight until death.

2 thoughts on “Goya in New York”